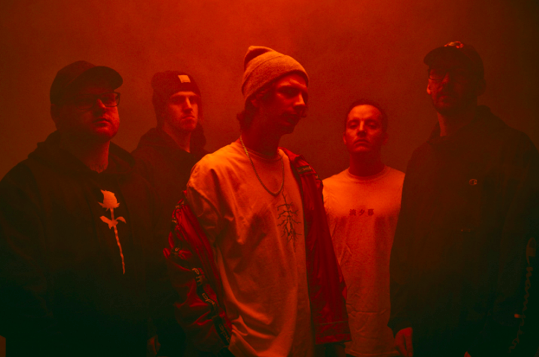 a quiet place to die
Out on September 25th
via SharpTone Records
Today, Australian metalcore band Alpha Wolf release their latest single "bleed 4 you", featuring guest vocalist Lizi Blanco of The Beautiful Moment. Stream here: https://shrptn.co/bleed4you. "This song is a little out of our comfort zone but upon completion we feel we created something special," says guitarist Sabian Lynch. "We're not a band who wants to stick solely to one sound, we have a wide variety of influences and we want each song to stand up on its own. We had written pages of lyrics for this song as it seems most people have a love story of some sort where the timing hasn't worked out, and the further we delved into the song the more apparent it came that the song didn't need pages of lyrics, just a handful of the right words."
Lynch continues, "Bringing Lizi in to be part of bleed 4 you was something special. We haven't had an outside voice sing on a song of ours for quite some time and so we were very cautious at first; however being label mates with Lizi/The Beautiful Monument as well as huge fans of her voice, it all came together so well and we couldn't have found a better fit. We flew her down to our studio to just make it that little more personal, and once we began, we were so overwhelmed at how perfect her voice sat in the song, we knew we were onto something special."
"bleed 4 you" is the third single, following "Akudama" and "creep", from the Alpha Wolf's forthcoming album a quiet place to die, due out on September 25th via SharpTone Records. The album is available now for pre-order here: https://sharptonerecords.co/collections/alpha-wolf. For more information on Alpha Wolf, please visit: https://www.alphawolfcvlt.com/.
###
An iron will is only ever hardened within the forge, and Australia's fastest rising metalcore act Alpha Wolf have proven they are made of sterner stuff. The five-piece bared their teeth in 2019 with the release of their EP Fault in joint partnership with Greyscale Records and SharpTone Records, it became a line in the sand that set expectations for all that would follow.
The band played sold out shows across Australia both headlining, and in support of acts such as Polaris and August Burns Red; as well as a slew of international tours across Asia, Europe, and even dipping their toes in to the American market.
If Fault was the line in the sand however, Alpha Wolf desired to make their mark permanent, something etched in stone for all to see. The band needed to push themselves harder, the band needed to prove they were worthy of their name, the band needed a quiet place to die.
2020 sees Alpha Wolf bite harder than ever with their sophomore release a quiet place to die, the culmination of every lesson learnt, every hit taken, and every loss felt. a quiet place to die is the end result of five individuals who have faced the fire and refuse to flinch, pouring their every-thing into making something they are truly proud of. The path to this point has only made their thirst greater, and soon enough, the wolves will be out for blood.
Alpha Wolf is Lochie Keogh (vocals), Scott Simpson (guitar), Sabian Lynch (guitar), John Arnold (bass/vocals) and Mitch Fogarty (drums).
a quiet place to die
1. a quiet place to die
2. Creep
3. Golden Fate; Isolate
4. Akudama
5. Acid Romance
6. Rot In Pieces
7. bleed 4 you
8. Ultra-Violet Violence
9. The Mind Bends To A Will Of Its Own
10. Restricted (R18+)
11. don't ask...
Share Share on Facebook Tweet Tweet on Twitter