The Boys of Fall made a decision that they would be "purposefully making conscious decisions creatively to make it more intense and impactful" in regards to the writing process for their brand new album Distance which is available everywhere tomorrow, 11/20/2020, via InVogue Records.

However, if you can't wait until this releases, you can catch Boys of Fall Presents Distance: A Visual Album Experience Distance tonight, 11/19/2020, at 8PM EST here. We trust you grabbed your early bird ticket for $8 to have access to this amazing documentary, exclusive blue vinyl variant, merch, and much more! You can still pre-order today at www.boysoffallband.com.

Boys of Fall open up the documentary with a performance of their stripped-down track Rain. This track is honest and penetrating, with lyrics touching on a failed relationship written in the perspective of somebody who is trying to deal with the idea that the one they loved never felt the same way towards them, even to the point that they are no longer a memory in their mind. This song tackles the idea of dealing with pain while the other person goes on as normal.

Next up we are brought right into Heavy Hearts, which is a song written in the perspective of somebody realizing that the person they were with was not healthy for them as they were taken advantage of and lied to. The subject of the story is also coming to realize that they had lied to themselves this whole time about their partner- who they wanted to believe was right for them. However, when their partner is confronted, they play the victim. At the end of the cycle for Better Moments, some of the guys were feeling 'numb' and realizing that this album was not everything they had desired it to be. The process felt rushed, and although it allowed them to push boundaries and got them out of their comfort zones, the end result did not sit right with them. So they decided that with this new album they would do it their way.

Boys of Fall set out to create an album that was thoroughly genuine. The idea behind Distance was "purposefully making conscious decisions creatively to make it more intense and impactful." Listening to this album, the raw emotion felt through the lyrics, the atmosphere and tone the instruments set, along with the overall story progression through this album from cover to cover, they undoubtedly have fulfilled what they set out to do.

Next up we are introduced to Mad Sad, a song where the subject is stuck feeling guilt for allowing themselves to let everything get as far as it does. We see the subject double-guessing if their feelings and actions are justified or not after being hurt through this toxic relationship that has them pulling each other down. Little Disasters follows up with the subject consciously realizing hate taking over as they see the impact their partner has on them. After finally realizing their true worth to their partner in this 'little disaster' of a relationship, they decide to confront it head on.

The writing process for Distance was similar to how the band has worked together in the past on new material. As a whole it's a collaborative effort, but generally it starts out with Jake and Mike giving direction through structure, tone, and emotion, which then goes to guitars and drums to collaboratively put substance to the early song structure.

Distance was constructed and produced by the members of Boys of Fall with attention to more emotion, which allowed for chord progression structures and a feeling that there were no limits as they decided they were "going to write the songs to where they take us, and we're not going to dictate that. You're going to know it in your gut when it's ready." It's evident that raw, genuine emotion was the catalyst to the creation of Distance.

With self-producing Distance, Boys of Fall have expressed how this has allowed them to craft and hone their tools they have learned over the years. Changing to this method did allow them to put more time in the writing and production processes which is most important to them as it allows them to work with their best friends on a common project. They went from a normal 2.5- 4 week timeframe from previous albums to having over six months to work on Distance.

The title track of the album is the perfect example song that best describes Boys of Fall. Distance is a song that centers around a story of hurt, and if you don't get this song, which is the first track on the album, you're not going to get the rest of the album or understand the group. The music video for this song has a poetic, Notebook-esque vibe to it that flows throughout the whole album. Midnight follows this song up beautifully as the story continues on with paranoia creeping in creating more false narratives. The subject has a back and forth moment in their head, telling their partner to go and stay, as they try to deal internally with these contrasting minsets. We do see a moment though where they do reach out to be saved as they see the signs of the walls closing in.

With the time between their last two albums, Boys of Fall have had many experiences that have brought them to where they are today. After their push on their last album, with a lot of time on the road touring, the band had a lot to process that happened in their lives individually. In this time they came to realize that trusting your gut and listening to your heart is integral as you don't get time back. This helped spark the creation of this album and the tone they wanted to convey with it. The biggest questions they had for themselves hovered around the idea of what legacy they will leave behind and to always ensure you do your best to make your life of value with those in your life you love. Did they do enough to leave behind a legacy?

Closing out the visual album experience is Worth It and Closure. Dealing with your own demons inside you is a great burden, but having to deal with the demons in others that work to bring you down begs for one to ask the question of is it worth it? Closure brings the realization that you can get past it, but it also changes you. Obtaining closure does not necessarily mean you are going to be okay, especially when you don't believe it's going to change anything.

This visual album experience from Boys of Fall of their upcoming album Distance, which is out 11/20/2020, is absolutely a message that is important to so many people today in the year 2020. Of course this album was just important to the band as it allowed them to be themselves, work collaboratively towards a common goal, and share stories that many will be able to relate to. After watching Boys of Fall presents Distance: A Visual Album Experience, it's evident that they purposefully made this album more intense and impactful. 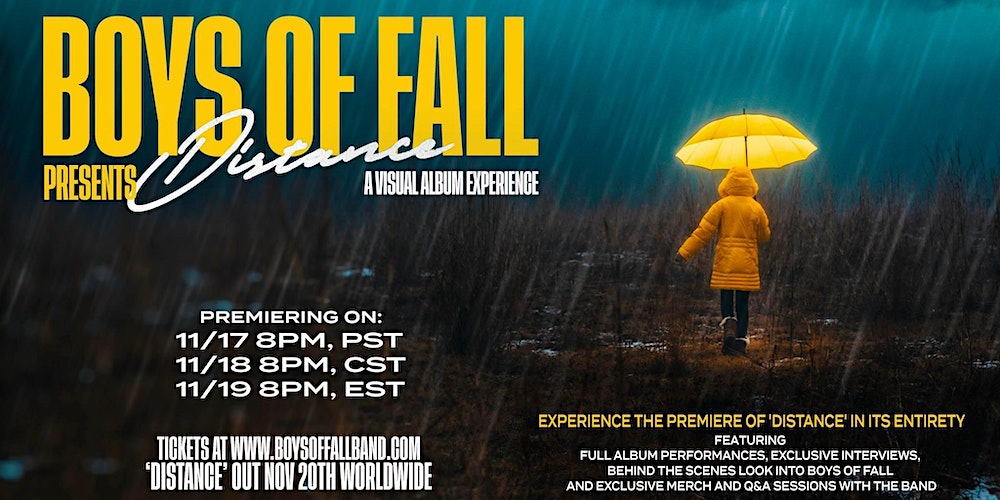