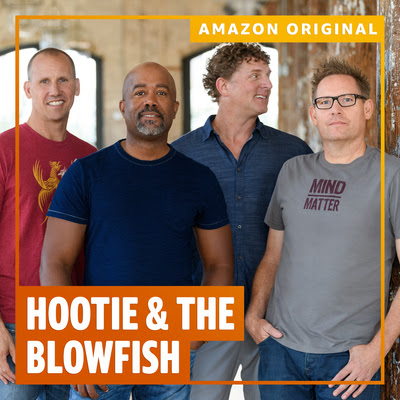 Today, Hootie & The Blowfish released an Amazon Original cover of R.E.M.’s “Losing My Religion,” available to stream and purchase only on Amazon Music.
Listen To “Losing My Religion” only on Amazon Music:
amzn.to/Hootie
"When we were cutting our teeth as a band, almost every night fans would hear us on stage covering R.E.M.," shares Hootie & the Blowfish frontman Darius Rucker from his home in South Carolina. "'Losing My Religion' is a song that when you first listen to it, you can feel the struggle, the back-and-forth. Plus, Peter Buck wrote the song on mandolin, and being in the south, it's a lot of fun to perform live. We're releasing it as a cover with Amazon Music as I think it's still as thrilling to people today as it was when it was first released."
With the rich, bluesy vocals of Darius Rucker and gleeful harmonies of guitarist Mark Bryan, bassist Dean Felber and drummer Jim “Soni” Sonefeld, Hootie & the Blowfish sold over 25 million records worldwide after their infectious melodies hit the airwaves in 1994 with hits such as “Hold My Hand”, “Let Her Cry” and “Only Wanna Be With You.”
The band’s 2019 Group Therapy Tour saw the band play to sold-out crowds across the U.S. and Canada, including two nights at the iconic Madison Square Garden, as well as a run of shows throughout the UK and Ireland. The triumphant return to the road earned Hootie & the Blowfish several prominent profiles recognizing their important musical legacy, including the cover story of the New York Times Arts & Leisure section. On November 1, 2019, they released their first new music in nearly 15 years with Imperfect Circle, named one of the “biggest albums to hear this season” by Entertainment Weekly and featuring radio single “Hold On.”
Amazon Music listeners can find Hootie's cover of "Losing My Religion" on the “Certified Country” playlist, Amazon Music’s stage for country fans looking for a collection of smashes from the best names in country music. Amazon Music customers can also simply ask, "Alexa play the Amazon Original by Hootie & The Blowfish" in the Amazon Music app for iOS and Android and on Alexa-enabled devices. In addition to the new track, Amazon Music listeners can access hundreds of Amazon Originals featuring both emerging and established artists across numerous genres, available to stream and purchase only on Amazon Music.
Share Share on Facebook Tweet Tweet on Twitter