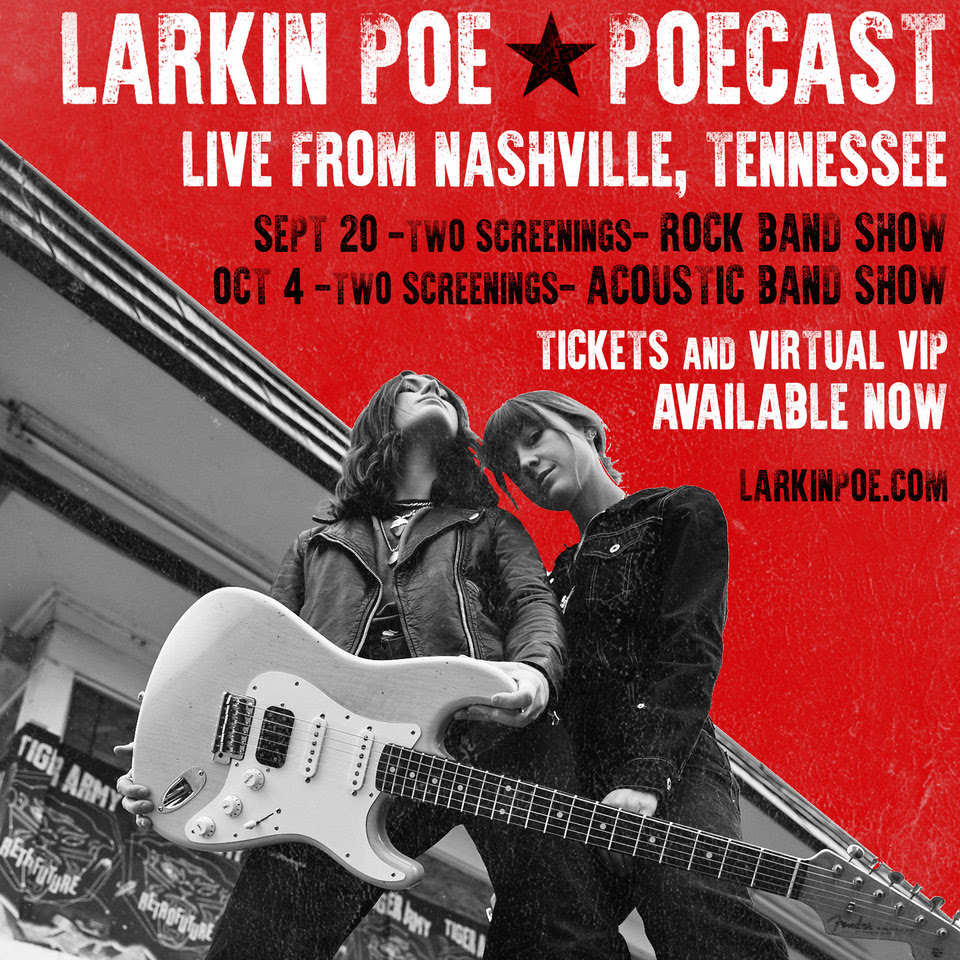 Larkin Poe are thrilled to announce four performance screenings via the all new POECAST. The band will be sharing two shows recorded live from their rehearsal space — one plugged-in rock show on 9/20 and one acoustic band show (with stories from the road) on 10/4. Each show will air twice on their respective days, first at 2pm ET and then again at 8PM ET. If fans are unable to watch the shows “live”, they will be available to watch after each airing.
While the shows stream, the full band will be in the chat room interacting with fans plus special guests are expected to make appearances in the chat room as well.
Tickets, VIP passes, limited edition shirts and posters available here: https://shop.larkinpoe.com.
Larkin Poe released their fifth studio album SELF MADE MAN this past June on their own Tricki-Woo Records. American Songwriter describes the album as “rugged, crackling, and invigorating” and No Depression raves “these ladies are killers…The Lovell sisters are fully invested in anything they tackle, and they deliver it with a power and fire that snaps your head back…” And PopMatters observes a band truly taking their career by the horns with their newest album saying “Larkin Poe shove cock-rock out of the way with SELF MADE MAN…Laden with confidence and power, affirming Larkin Poe as absolute badasses.”
In its first week of sales the album rose to the top of Billboard’s “Top New Artists Albums” and “Current Rock Albums” charts, while also climbing to #1 “Blues Albums”, #2 on the “Americana/Folk Albums” (bested only by Jimmy Buffett), #7 “Heatseekers" and #11 on the overall “Top Current Albums Sales” chart. In addition, SELF MADE MAN was among the top 5 on Nielsen SoundScan’s “Record Label Independent” chart, as well as the top 10 on a variety of other charts, including “Internet Albums,” “Digital Albums,” and “Current Digital Albums.”
SELF MADE MAN sees the multi-instrumentalist sister duo, comprised of the Atlanta-bred, Nashville-based Rebecca and Megan Lovell, pushing their music and message towards hitherto unexplored terrain, inspired by their epic world travels yet still powerfully rooted in the creative heritage of their beloved American South. Songs like the gothic gospel “Holy Ghost Fire” manifest a key aspect of the southern tradition, presenting a sense of celebration and renewal amid the common struggles of existence, offering a way to move through trying circumstances.
SELF MADE MAN – which follows 2018’s chart-topping, GRAMMY® Award-nominated fourth studio album, VENOM & FAITH – was self-produced by Larkin Poe, like its predecessor, with “our good buddy and engineer” Roger Alan Nichols at his Nashville studio, Bell Tone Recording. From the thunderous power of the album-opening “She’s A Self Made Man,” through the nostalgic “Tears of Blue to Gold” and fierce Chicago blues of “Scorpion,” to the front porch jubilation of “Easy Street,” the album is ambitious in both its eclectic, energetic sound and its resolutely welcoming mission, its universal lyrical approach fueled by tradition, invention, and Larkin Poe’s remarkable ability to touch the hearts and souls of their fellow humans worldwide.
PURCHASE/STREAM SELF MADE MAN
Share Share on Facebook Tweet Tweet on Twitter