NECK DEEP
RELEASES NEW SINGLE "WHEN YOU KNOW"
SECOND SINGLE FROM FORTHCOMING ALBUM
ALL DISTORTIONS ARE INTENTIONAL
OUT JULY 24th, 2020 VIA HOPELESS RECORDS 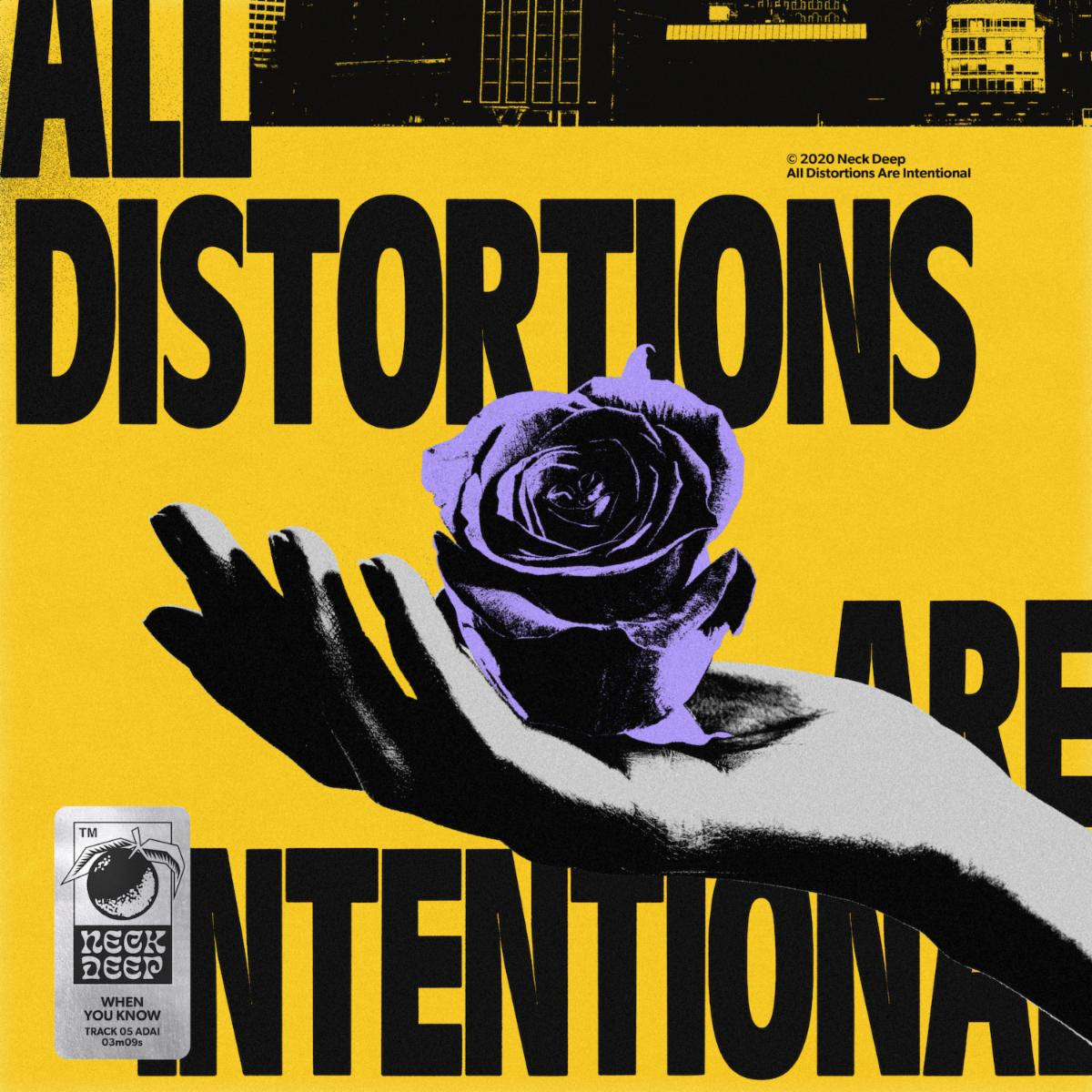 FALL NORTH AMERICAN HEADLINE TOUR
TICKETS ON SALE NOW AT TICKETS.NECKDEEPUK.COM
APRIL 13, 2020 - Really driving home the fact that the #NDUnit is stronger than ever Neck Deep have joined with fans to create a music video for brand new single "When You Know." After the current COVID-19 crisis derailed the band's plans for their music video shoot, they took to the internet to ask fans, friends and fellow artists to help them create a one-of-a-kind lyric video for the track.
Speaking of the new song, singer Ben Barlow says, "'When You Know' is a song about realizing you're in love. The old saying 'when you know, you know' was in my mind with this one."
"In the timeline of ADAI this is where Jett realises, after a wild night out, and another night talking about how they see the world and realising they share similar feelings, that he is in love with Alice," reveals Barlow. "The mutual feeling of not belonging, the difficulties of their day to day lives and battling their inner insecurities, yet now having each other to ease the pain and giving a sense of purpose is the key take-away from this song. It's a pretty straight up summer love song, but one that's mega catchy and feel good - a stark contrast to some of the more emotionally heavy songs on the record."
Fans can stream the new music video today at http://smarturl.it/WYKvideo.
"When You Know" joins "Lowlife"as the second single from the band's forthcoming album, All Distortions Are Intentional. Due out July 24, 2020 via Hopeless Records, this is no mere collection of songs. All Distortions Are Intentional is conceptually rich, with themes of disconnection, existential confusion, and the search for meaning.
The album tells the story of a loner named Jett, who lives in Sonderland, a combination of "Wonderland" and the somewhat obscure word "sonder": the realization that each random passerby is living a life as vivid and complex as your own, with their own ambitions and worries. "It's that strange existential realization that you are not the entire world," explains singer Ben Barlow. "Everyone around you feels and lives the same way that you do. You're just an extra in their story."
The forthcoming album is the follow up to 2017's monumental release, The Peace And The Panic, which catapulted the band into mainstream success with a #2 charting position on the U.S. Billboard Top 200 Albums Chart and welcomed their first U.S. Late Night TV performance. All Distortions Are Intentional is a journey of self-discovery and personal expression not unlike the rise of the band itself.
Neck Deep enlisted the talents of Grammy-nominated A-list producer Matt Squire (Panic! At The Disco, Ariana Grande, One Direction) to create ADAI, recording in Wales at the legendary Monnow Valley Studio, which has been a recording home for artists like Oasis, Queen, Led Zeppelin, Joss Stone and more. Squire and Neck Deep tucked themselves away at the world-famous residential studio, located in the gorgeous but remote Wye Valley in the heart of the band's native Wales. The decision to create the album 'at home' was an important one; on the eve of what's certain to be Neck Deep's greatest exposure to the world yet, it's a grateful and decisive acknowledgment of where they've come from, both literally and figuratively.
This fall, Neck Deep will be kicking off their North American headline tour in celebration of All Distortions Are Intentional. The tour kicks off November 6th in Nashville, TN and will hit Los Angeles, Chicago, Baltimore, Kansas City, Austin, Philadelphia, Toronto and more before wrapping up for one of their biggest US shows to date in New York City at Terminal 5.
A full list of tour dates are below with more information available at tickets.neckdeepuk.com.
Upcoming Neck Deep North American Tour Dates
November 6 - Nashville, TN - Marathon Music Works
November 7- Atlanta, GA - Tabernacle
November 8 - Orlando, FL - Hard Rock Live
November 10 - Dallas, TX - Bomb Factory
November 11 - Austin, TX - Emos
November 13 - Phoenix, AZ - The Marquee
November 14 - Los Angeles, CA - The Novo
November 15 - San Francisco, CA - The Warfield
November 17 - Portland, OR - Crystal Ballroom
November 18 - Seattle, WA - Showbox SODO
November 20 - Salt Lake City, UT - The Complex
November 21 - Denver, CO - Ogden Theatre
November 22 - Kansas City, MO - The Truman
November 24 - Minneapolis, MN - Skyway Theatre
November 25 - Chicago, IL - Radius
November 27 - Detroit, MI - Royal Oak
November 28 - Cleveland, OH - The Agora
November 29 - Pittsburgh, PA - Stage AE
December 1 - Charlotte, NC - The Fillmore
December 2 - Norfolk, VA - The Norva
December 4 - Baltimore, MD - Ram's Head Live
December 5 - Philadelphia, PA - The Franklin Music Hall
December 6 - Sayreville, NJ - Starland Ballroom
December 8 - Toronto, ON - The Danforth Music Hall
December 9 - Toronto, ON - The Danforth Music Hall
December 11 - Worcester, MA - The Palladium
December 12 - New York, NY - Terminal 5
Neck Deep leapt from side project to full time band in 2012, after a single track online led to a pair of EPs followed by a deal with Hopeless Records. They struck a chord with a burgeoning audience, quickly heralded as leaders of a resurgence in hook-heavy punk, with an immediate accessibility and fun attitude combined with genuine concern for issues like loneliness, depression, and anxiety. The instant relatability of the band's songs and overall approachable attitude endeared them to a new and incredibly passionate generation, with devotion to rival the biggest titans of melodic rock.
All Distortions Are Intentional marks Neck Deep's arrival as an arena-confident band. Having mastered all of the strengths of the scene that birthed them, Neck Deep have evolved to this next stage, and as their crowds grow larger, it's clearer than ever just how much this "silly little band" has come to mean to people.
All Distortions Are Intentional is available for pre-order today at http://smarturl.it/NDADAI.
Share Share on Facebook Tweet Tweet on Twitter