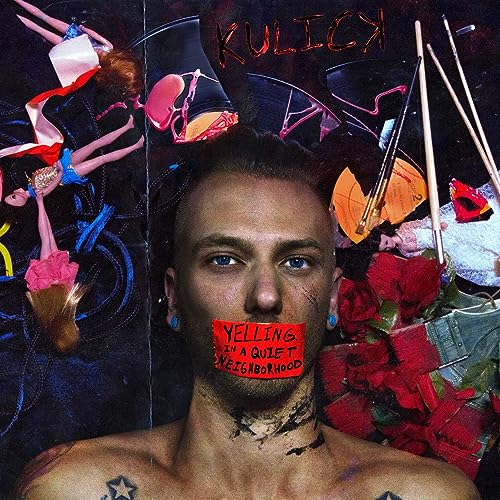 K: This record was written while going through a breakup and divorce. I was writing all the time on my phone, in notebooks, and on my laptop. I just needed a place to write what I was feeling because I was so overwhelmed with the drastic life change, the loss, the guilt, and sexual confusion as well. As for the art, I worked on it with April Rose Gabrielli while living at my brothers house. We were both in a very creative space at the time with writing and painting, so we decided to make individual artwork for each single. We'll be selling an art book with that soon!

S: Looking back, what differences can you point out in the writing process and the construction of 'Yelling in a Quiet Neighborhood', versus your first full-length EP 'Hydroplane'? Is there anything you would change differently about 'Hydroplane'?

K: I just had so much more control over Yelling in a Quiet Neighborhood." I self produced this record, whereas the Hydroplane album was produced by other producers. I played almost every instrument on the new record as well. I just enjoyed the creative freedom of writing the new record. I wouldn't change the recording process of Hydroplane besides maybe influencing the production a little bit more.

S: You started your musical career before you were even a teenager, writing and recording at the age of 12. What can you remember about the writing process at this age, and what message do you have for others who feel secluded and isolated?

K: The writing process was very much like writing in a journal. I would fantasize sometimes and write stories, but most of the time it was just an emotional outlet, as it still is today. For anyone who feels alone, you should know that there are communities of people who feel the same way. I used to think that answer was bullshit, but it is true. There are people like you out there. You just have to be brave enough to go out in the world and find them.

S: Your music video for 'The Way I Am' features some home footage from the late 90s- what was your favorite memory from this time in your life? With this being such an emotional record, is it hard to revisit some of those memories?

K: My favorite memories are playing outdoors with my brothers. The summer sun and tackle football, bike rides, and the pool. I still get such nostalgia seeing both John and Joel on a sunny summer day. It used to be difficult to revisit those memories, because I remember the bad more than the good. However, I saw so many loving memories with my mother and my father, so it actually made me rewire how I think about my childhood. It may have not been the best at times, but we had some good times as well.

S: You have toured on the road with many amazing artists throughout the years. Touring with such successful musicians (Jimmy Eat World, Third Eye Blind, Sleeping With Sirens and The Rocket Summer for example) what did you learn from them, and how do you continue this with your fans?

K: I have been so fortunate to have those opportunities, and reading them all in one sentence is crazy! The main thing I've learned is that we are all the same. We are all just human beings creating art, and every act that I played shows with showed respect, passion, and love. I try to always show the same for my fans.

S: 2020 certainly did not go as anticipated, and along the way many people had to completely adapt. What did you have to change in your daily routine due to Covid-19, and what plans do you have for 2021?

K: I was very untethered in 2020, so I didn't have to change much. It gave me time to write and create art. Of course we can't play shows, which is shitty, but I decided to focus on writing and moving forward instead of sulking. For 2021, I hope to release another record at the end of the year with ENCI records,and touring fingers crossed!

S: Lastly, we absolutely love the unknown! Although we all know Squatch is real, can you tell us any experience(s) you've had with unexplained events, unidentifiable objects, or even spotted Squatch yourself? We would love to hear your experiences with the unknown!

K: Well, Squatch I have never seen, but the main superstition I have is with the number 218. It follows me most places, on clocks, mile markers on the highway, hotel rooms, etc. My grandfather passed away on February 18th, 2008, and ever since then, I have seen that number often. I used to be afraid when I saw it, like I was going crazy, but now I see it as something watching over me and protecting me.