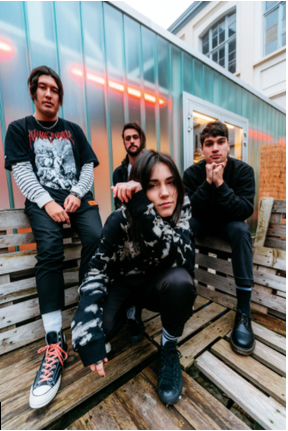 Stand Atlantic have released a special video for a new song called "Drink To Drown" today. The band recently called for fans to share video clips showing what they were doing during quarantine and social distancing, which can now be seen here at this link: www.smarturl.it/drinktodrownvideo
During the video's premiere on YouTube, the band took time to answer fan questions during a live chat. After working on a new album for over a year, plans have now been shifted and postponed due to the current pandemic. With it being a very difficult and uncertain time for music, Stand Atlantic reached out to fans and opened up an honest dialogue about how we can go through this journey of uncertainty TOGETHER. Fans from across the globe sent the band their thoughts and with the clips put together for the final video, it's clear it became a representation of the bravery of the unknown.
Lead vocalist and guitarist Bonnie Fraser explains, "We're living through history right now and as scary and uncertain as this time may be, the one thing that has been so positive to see is how everyone has come together. Everyone is going through it all at once, we're looking out for each other from afar and there's something comforting about that which makes it feel like maybe this is all going to be ok. We also wanted to portray some positive aspects about the impacts of isolation. We had our fans across the world who are currently in isolation send us videos of themselves doing things they either never had time to do or have never even thought about doing, but now have the time to try them out. We hope this will spark creativity and solidarity to anybody who's watching and has been affected by COVID-19."
Share Share on Facebook Tweet Tweet on Twitter