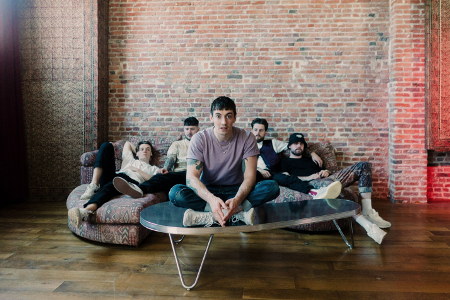 Trash Boat have released their powerful new single ‘He’s So Good’. A concept piece about a young man who, even in the face of abandonment, spite and naked homophobia remains a positive and loyal element in their family; forgiving and loving parents who don’t love him back. A timely and much-needed comment on the discrimination that still runs rife in our society. It’s a topic that, in many senses, strikes close to home for the band.
“Mercifully, my background is love and support,” explains lead singer Tobi Duncan. “I come from a family who never expected me to be anything other than myself. I will always be thankful for that. I never felt the need to announce that I felt differently, because I didn’t feel different in a way that was upsetting me. I have a brother, a cousin and an uncle, all gay. No issues, just love. I too was interested in men the same way I was with women. I reserve my right to be attracted to any one human in the world regardless of their gender/ orientation or whatever. Why box myself in? A label seems limiting. I just felt like me and felt comfortable being so with the support of my family and friends.”
Listen and watch the music video for “He’s So Good” here: https://smarturl.it/hessogoodvideo
To coincide with the release of ‘He’s So Good’ the band are teaming up with Hopeless’ Records Sub-City not-for-profit to donate proceeds from merchandise sales to AKT, a charity dedicated to helping LGBTQ+ youth at risk of homelessness in the UK.
“It will never cease to amaze me that people can let such a benign thing as sexual preference or gender identity have such a dramatic impact on their concept of morality,” continues Tobi.  “Even to the point where they would abandon their child. As if the deviation from the status quo of human presentation and partnership for procreation was an affront to the very essence of what it is to love. I wanted to put that energy into a song. I want people to know that it is written with them in mind. I want people to be able to use the topic as a point of pride and enjoy listening to music that makes them feel confident and heard. Ask anyone who knows me well, they know this isn’t a shy topic for me! There’s just a time and a place. And it’s now…”
‘He’s So Good’ follows on the heels of 2018’s critically acclaimed Crown Shyness album which saw the band perform on the Main Stage of Reading and Leeds Festivals, cut a live session at the legendary Maida Vale for BBC Radio 1, sell out London’s Islington Academy and  cemented their place as one of the UK’s most exciting young rock bands.
“I never felt the need to ‘come out,” finishes Tobi. “There is a part of me that has a fundamental problem with the concept. Heterosexual people don’t need to ‘come out’ because it’s not necessary for them, they simply are, and there’s a general, unspoken respect for that fact. I think whole idea of having to ‘come out’ shouldn’t exist. It only exists because people feel so marginalised and repressed that they make a brave, proud and bold statement in the face of their antagonist. But I don’t think inspiring more pride is what’s most important. I think disproving and utterly silencing the antagonist is. No-one should be made to feel like they have a duty to share such an intimate part of themselves just so someone that doesn’t understand you (or want to) can categorise you and put you in a neat little box, just so they can think they know everything about who you are and how you feel. It makes it easier to judge. Judgement based on what? I don’t want to hear a fu**ing thing about religion, procreation, the word ‘unnatural’, continuing the family bloodline or any other of the weak, bulls**t ways people dress up a version of ‘I DON’T LIKE THE WAY YOU ARE AND WOULD CHANGE YOU IF I COULD’. Fuck you.